A Poem "All Hallows Eve" on The New Verse News. 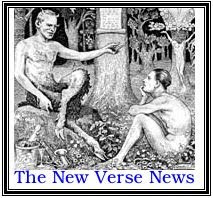 Trick or Treat? A new poem "All Hallows Eve" appears in the online journal The New Verse News edited by James Penha (posted 10/31/2011). I hope you enjoy another abcedarian and a little bit of silliness to celebrate Halloween, and what would quite accurately describe the view from my window of the activities on Bloomfield Street in Hoboken New Jersey earlier this evening -- we had our annual Ragmuffin parade. Please follow the link, read the little ditty and show some love:
http://newversenews.blogspot.com/2011/10/all-hallows-eve.html
Posted by ROXANNE HOFFMAN at 9:46 PM No comments: 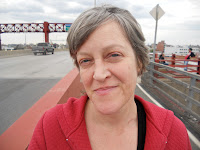 Su is currently working on her second book and her one woman show.
Posted by ROXANNE HOFFMAN at 7:38 PM No comments:

Monday, October 3, 2001, New York, NY -- The public is invited to enjoy free poetry performances by some of the city's most popular poets at the Naumberg Bandshell in Central Park, this Monday, October 3rd,  from 4pm to 7:30pm, at an annual event series hosted by the infatigible poetry powerhouse Angela Peluso.  Budding and seasoned poets of all ages are encouraged to join the scheduled line up by reading their work at an ongoing open mic between the schedule performance. The event known as Poetic License is 17 years old, and celebrates freedom of speech, freedom of assembly, the pursuit of happiness, and mankinds's creative spirit in the glorious public green space at the core of Manhattan.  Poetic Licences has seen may changes, enduring new mayors and their political regimes, Wall Street and the city's real estate booms and crashes, the death of some of the most regular performers, while continuing to welcome new faces from the New York poetry scene as well as old friends. This Monday's stellar line-up include poets Roxanne Hoffman, Evie Ivy, Ron Price, Florence Kindel.

Evie Ivy, a dancer and poet who currently curates two reading series, including the long running Green Pavilion Poetry Event in Brooklyn says "I always enjoy reading for Angela at Central Park, in the fresh air, among the trees. And have been happy to read or listen to an always nicely chosen group of poets! Looking forward ..."

Angela Pelusa says,"Come join us to close the seventeenth season. We're still here, no matter what!"

Directions: Central Park's Naumburg Bandshell, South of Bethesda Terrace btwn 66th & 72nd Sts., New York, NY.  By subway take the C train to 72nd Street at Central Park West,  or 1, 2, 3 to 72nd Street & Broadway.   Enter the park at 72nd St. & Central Park West.  Walk east towards the Bethesda Fountain, then head south passing the roller skaters on your right to the bandshell on you left.

Ron Price, a Pulitzer-Prize- and a National Book Award-nominated poet, works as Poet in Residence at the Juilliard School . He has taught as a Poet in the Parks, Poet in the Schools and Poet in the Prisons in Tennessee and Pennsylvania – these in addition to an endless string of useless jobs that include mailroom gopher, assembly line worker, forklift driver, leather craftsman, house organ editor, parking lot attendant and bookstore clerk. He has published in "The American Poetry Review," "The Hindu" (India), "Leviathan Quarterly" (U.K.), "The Painted Bride Quarterly," "Poetry," "Revista Forum" (Mexico,) and "Zone3." He is a past U.S.I.A. Visiting Poet to Belgium; has read and lectured throughout India for the Bureau of Cultural and Educational Affairs; and has twice given readings in Israel at the invitation of the American Center. He is the author of "Surviving Brothers," "A Crucible for the Left Hand," and "A Small Song Called Ash from the Fire."

Evie Ivy, is a professional dancer and published poet in the NYC poetry circuit. She has three chapbooks, her latest, "Cinquain, My Dear Cinquain, Selected Cinquains"  was recently released by Grey Book Press. Her full-lenth collection, "The First Woman Who Danced," includes poetry based on her experiences as a dancer and dance instructor. She co-hosts one of the longest running poetry readings in the city, The Green Pavilion Poetry Event in Brooklyn, as well the Poets-on-White Reading Series in Tribeca, Manhattan.

Roxanne Hoffman worked on Wall Street, now answers a patient hotline for a New York home healthcare provider. Her words can be found on and off the net in such journals as "Amaze: The Cinquain Journal," "Clockwise Cat," "Danse Macabre," "The Fib Review," "Hospital Drive," "Lips Magazine," "Lucid Rhythms," "Mobius: The Poetry Magazine," "The New Verse News," "The Pedestal Magazine" and "Shaking Like a Mountain;" the indie flick "Love and the Vampire"; and several anthologies including "The Banana Republic: A Literary Anthology by Gang Members and Their Affiliates" (Soft Skill Press), "Love After 70" (Wising Up Press), and "It All Changed in an Instant: More Six-Word Memoirs by Writers Famous & Obscure" (Harper Perennial). She runs the small press, Poets Wear Prada, since 2006 and blogs at http://roxanne-hoffman.blogspot.com/   and http://pwpbooks.blogspot.com/ .

Florence Kindel is the author of the chapbook Dissolutions (Green Zone, 2009. Kindel was born in Orange, New Jersey. She has her BA in Fine Arts from Kean University, NJ, and her MFA from the School of Visual Arts, NYC, in painting and drawing. She has taught at several colleges in NJ. She has been writing since early childhood and left painting to write poetry in 1983. She lives with her husband and dog in NYC

Angela Peluso, long-time model, performance artist and writer, is the author of "Nude Poet," a very personal collection of poems and stories with vivid color and moody black & white photos interspersed.  Angela has been featured and produced shows at The Back Fence, The Yippie Cafe & Museum, Bowery Poetry Club, The Telephone Bar and the Smalls Jazz Club and has been featured on the "Poetry Thin Air" Cable Show.
Posted by ROXANNE HOFFMAN at 9:52 PM No comments:

A Poem Reprinted from The Rutherford Red Wheel Barrow 4

LIFE WITHOUT CLOCKS
By Roxanne Hoffman


The only reason for time is so that everything doesn't happen at once.
—Albert Einstein

would mean no waiting
no anticipation

never EVER being late
nor early
nor on time

just existing in the moment
always PRESENT
future and past, spun on a dime.

no cause and no effect
no unfolding story to foretell or to retrospect.

if we’re born and we die INSTANTANEOUS
have we even existed at all?
or if we lead schizoid lives, two-faced like Janus,
does polygamy become protocol?

Or are we merely chaste immortals?

Posted by ROXANNE HOFFMAN at 7:42 PM No comments:

I am pleased to announce that 3 of my poems "Life With Clocks," "The Family Tree," "The Pursuit of Progeny" appear in the 4th edition of the The Rutherford Red Wheelbarrow. 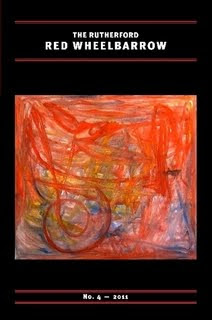 
In addition to the poetry, four essays give insight into the life and work of the Rutherford doctor/poet: "William Carlos Williams and the Baroness" by John J. Trause; "The Poetry Reading" by Madeline Tiger; "Friendship and ‘The Figure 5’" by Marian Calabro and "Medicine, Languages, a River and the American Muses in the Work of William Carlos Williams" by Céline Beaulieu. Noted poet Jim Klein, who leads the Gainville poetry workshop, shares his thoughts on creating a painting in "Don’t Talk Unless You Can Improve the Silence," and Mark Fogarty gives a preview of his novel in excerpts from "It’s So Easy to Fall in Love."


The journal was launched on Wednesday, September 7, 2011 at 7PM at the Williams Center in Rutherford, New Jersey.  Copies are available online at Lulu.com (http://www.lulu.com/content/10922431) and will be available through Amazon.com by the end of the year. For more information and mailorders contact the Editors.
Posted by ROXANNE HOFFMAN at 7:00 PM No comments: