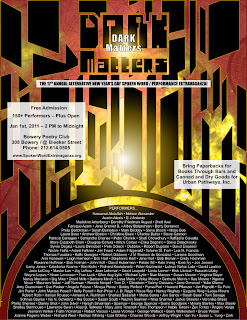 http://spokenwordextravaganza.org/
PLEASE SPREAD THE WORD NEAR AND FAR THAT THE LINK

FOR THE BOWERY POETRY CLUB STREAMING PAGE IS:

I'll be reading sometime between 8 and 10pm.

Starts at 2 p.m. and continues all afternoon, thru' the evening, till midnite.
Admission is FREE!!!
Please bring  paperback books for Books Through Bars, a nonprofit organization that gives literature to prison inmates, and canned and dried goods for Urban Pathways, Inc.

Come out and celebrate the New Year with some great readings and great sounds!


Posted by ROXANNE HOFFMAN at 6:59 PM No comments:

﻿
By coincidence this fall I've been rereading several collections by Nikki Giovanni & Rita Dove but only recently discovered the work of Ms. Sanchez.   I was totally charmed by Ms. Giovanni's Bicycles: Love Poems and intrigued with Ms. Dove's contemporary application of Persephone myth in Mother Love.  I highly recommend you get your hands on copies of each title to keep you company this winter.


Copies of MÖBIUS are available from the publisher at $15 a copy which includes $3 for shipping and handling within the USA.  (Outside the USA, please pay S&H using International Reply Coupons. Order forms are available at http://www.mobiuspoetry.com/. ) Please send your checks to:


For a sneak peak, here is my contribution:

All the Best Wishes for a Very Happy & Healthy New Year to You and Yours!
Posted by ROXANNE HOFFMAN at 11:08 AM No comments:


Reprinted from Press Release Email, Dated: Wednesday, December 8, 2010 11:15 AM, From: David Morneau
Posted by ROXANNE HOFFMAN at 9:12 AM No comments:

David Morneau's "No Pianos Allowed" concert is on Wednesday, 12/8.

David will be presenting three songs from his LOVE SONGS PROJECT:


These will be performed by Mary Hubbell (soprano), Roberta Michel (flute) and Ernesto Ramos (guitar).

LOVE SONGS is a new songwriting project that pairs sonnets by William Shakespeare with poems by contemporary writers. Each collaborating poet selects one sonnet and pairs it with a work of their own—an existing poem or one written especially for the project.  David is setting each pair to music.
You can preview "Behind Corneal Gates"  at the 5OF4 website: http://5of4.com/love_songs/sounds.html

The text for all 3 pieces as well the other pairs selected for the project can be read at the 5OF4 website:
http://5of4.com/love_songs/poets.html

Posted by ROXANNE HOFFMAN at 9:11 AM No comments: