New from Black Buzzard Press: IN FRAGILITY by Michael Graves 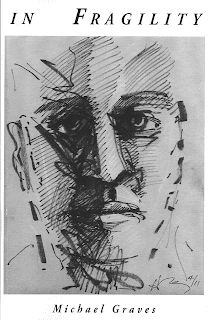 "Emotion recollected in fragility, these poems lucidly etch the power of darkness that endures, that returns. These poems are amazingly lucid, which gives them a paradoxical power."


"This grave book deals with such volatile elements as alcohol, sexual frustration, and apostasy. The reader will watch fascinated as Mike Graves burns his fuse down to the stick of dynamite he holds in his hand, for these poems approximate a searing self¬murder note addressed to any reader strong enough to peruse it. Only a poet as skilled and knowledgeable as Graves could render raw and repressed emotion with such acute control of form and diction, such range of allusion. But reader beware: you are about to take your own life into your hands."


"To adapt a phrase from James Joyce, whom Graves is influenced by, In Fragility offers readers the curve of multiple emotions. While traversing sentiments of aloneness and aloofness, and both objective and introspective, these poems are at once bleak, menacing, disturbing and humorous. They bespeak a stark sobriety often in conflict with itself and, through the effective use of metaphor and the recurrent theme of alienation, achieve a narrative coherence."

Speak to her
In fervent prayer
And fevered need
With brimming heart,
Shaking like a poisoned cup
And soft, sick gut,
Of where you rose
From nothingness
To nascent consciousness,
Inheritor of world
And family legacy,
Consuming time
And fragile self
That can't connect
Although it grow
In pain, organically,
Enthused by hope
And every false approach
Fear and circumstance allow

In two thousand four (2004), he was the recipient of a grant of four thousand five hundred dollars ($4,500.00) from the Ludwig Vogelstein Foundation. He is the publisher of the small magazine PHOENIX. Many years ago, he was a student of James Wright and organized a conference on James Wright at Poets House in 2004. And he became a member of P.E.N. a couple of years ago.

In addition to leading a James Joyce Ulysses’ Reading Group, he has published thirteen (13) poems in the James Joyce Quarterly and read from them and others of his poems influenced by Joyce to a gathering of the Joyce Society at the Gotham Book Mart.

Watch Michael Graves on YouTube.com at http://www.youtube.com/watch?v=HjGZeKfSW8g, an in depth interview and a reading. (Credit: Poetry Thin Air)
Posted by ROXANNE HOFFMAN at 7:19 PM