This Wednesday, Wednesday February 29th, Sadie Hawkin's Day, I will be reading & singing all about love in Brooklyn at the Green Pavilion Restaurant. Joining me will be poets Bernard Block and Hilary Sideris. There will also be an open mic.

Here are details followed by the Facebook event link: 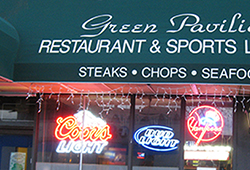 PLACE: The Green Pavilion Restuarant, 4307-18th Ave., Brooklyn, NY
ADMISSION: $5.00 food/drink minimum + $3.00 suggested donation.
DIRECTIONS: F train to 18th Ave. station. Last car coming from Manh, right staircase to street. You will be only about 1/2 block away from rest., same block you will be standing on.


The Green Pavilion Poetry Event, held the last Wednesday of every month, is hosted by Evie Ivy and Cindy Sostchen-Hochman.

About the featured poets:

HILARY SIDERIS has published poems in many journals, and in the anthologies "Pomegranate Seeds: An Anthology of Greek-American Poetry," and "Token Entry: Poems of the New York City Subway." Her first and third chapbooks, The Orange Juice is Over and Gold & Other Fish, have been published by Finishing Line Press, and her second chapbook, Baby, was published by Pudding House Press. She lives in Brooklyn and works for The City University of New York, where she develops programs for English language learners and first-generation college students.

BERNARD BLOCK's poems have appeared in the NY Quarterly, the Minnesota Review, Colorado Review and other university presses. Published four chapbooks: Quest; Prometheus Returns; Portraits; and To Music. Born and raised in Bensonhurst, Brooklyn. He attended Cornell University and completed a B.A. in English and American Literature at Brooklyn College in 1965. Hitch-hiked out to California in 1965 and helped organize the Port Chicago Vigil outside the Port Chicago Weapons Station in the Bay Area. He moved to the Haight-Ashbury and was there for the January, 1967 Be-In, the Monterey Pop Festival and the 1967 "Summer of Love". Gave poetry readings at the I and Thou Coffee Shop, City Lights Bookstore and in Golden Gate Park. He returned to New York City and earned his living as a social worker for the NYC Special Services for Children for the next 25 years. Studied with the poet Colette Inez in the mid-1970's. Read at Speakeasy, poet Emilie Glen’s apartment, Henry St. Settlement and Cornelia St. Cafe. Recently he has read at Nightingale, Cornelia St. Café, Bowery Poetry Club, Green Pavilion, Brownstone Poets, Phoenix, SOB’s, TOMI Jazz (a Japanese jazz club), Asian American Writers' Workshop, Penny’s, StringPoet and Molloy College.

ROXANNE HOFFMAN worked on Wall Street, now answers a patient hotline for a New York home healthcare provider. Her work has been published widely in literary journals like “Amaze: The Cinquain Journal,” “Clockwise Cat,” “Danse Macabre,” “The Fib Review,” “Hospital Drive,” “Lucid Rhythms,” “Mobius: The Poetry Magazine,” “The New Verse News,” “The Pedestal Magazine,” and “Shaking Like A Mountain,” as well as in several anthologies including “The Bandana Republic: A Literary Anthology by Gang Members and Their Affiliates” (Soft Skull Press), “Love after 70” (Wising Up Press), and “It All Changes in an Instant: More Six-Word Memoirs by Writers Famous & Obscure” (Harper Perennial). Her vampire poetry can be heard during Dave Gold’s 2005 indie flick “Love and the Vampire.” She runs the small literary press Poets Wear Prada, since 2006. Her new chapbook "In Loving Memory" with illustrations to by Edward Odwitt was released December 2011.
Posted by ROXANNE HOFFMAN at 7:43 PM 1 comment: